Jess Nash is a primary school teacher and living in Southampton with her partner Sam. They were thrilled when in 2021, Jess fell pregnant.

“We couldn’t have been happier when we discovered I was pregnant. The early and mid-pregnancy scans didn’t show any cause for concern, and the pregnancy progressed like any other.

On 23 December I experienced contractions, and on 24 December, my waters broken. Our baby was coming! 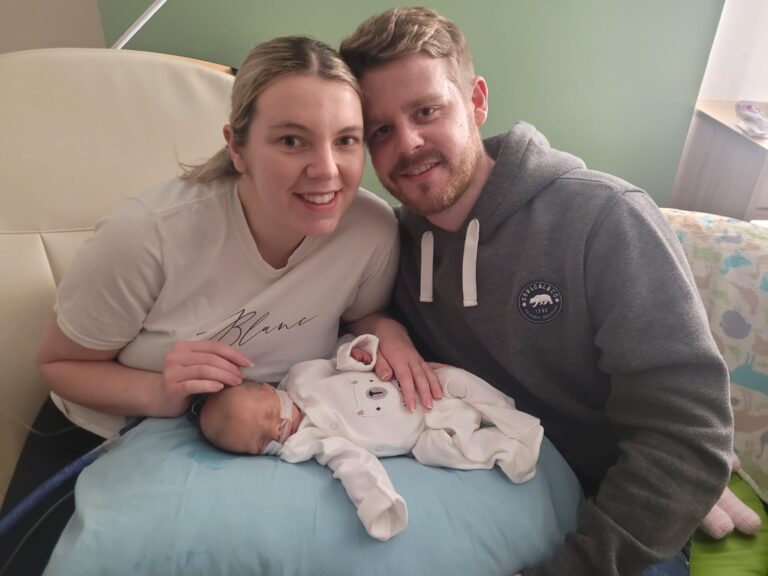 As I was only 33+4 weeks pregnant, they transferred me to Princess Anne Hospital in Southampton due to their specialist neonatal intensive care unit.

After an emergency c-section, and breathing all by herself, baby Ellie was born on 28 December 2021.

With Ellie being premature, we knew that she could spend some time in hospital, but never expected the journey that we were about to embark.

Ellie presented with what Doctors thought was a genetic skin disease called Ichthyosis meaning that she was born with an extra layer of skin. We all had bloods taken to confirm the genetic disease.

Ellie then began her neonatal journey, and was cared for by doctors, nurses, a team of Dermatologists, and expert advice from other specialist children’s hospitals.

To treat her skin, nurses applied cream all over her body every hour, alongside giving her tube feeds, and taking observations.

Over the next 24 hours, Ellie’s hands and feet started to turn black as the skin was too tight, restricting blood flow. That night we had a video call from the surgeons who needed to perform emergency surgery to relieve the pressure in order to save them.

After an antagonising wait, we were told that Ellie’s surgery had gone well.

She began to recover over the next few days, then suddenly contracted infections which became septic. On day 10, we were told by doctors that our daughter was fighting for her life.

She was then put onto a ventilator and over the next few days, things went up and down as we went on a never-ending rollercoaster.

Eventually, Ellie began tolerating her feeds again and she became more active. She looked so much better in herself. Her infections were under control, and she was able to come off the ventilator and finally breathe on her own again.

At that point we were able to have an active part in Ellie’s care routine by applying her cream, changing her nappy, and helping with her tube feeds.

Wanting to know a little more about what was going to happen in the near-future, we requested a meeting with Ellie’s consultant. The meeting seemed positive, and the word ‘home’ was mentioned for the very first time.

Although we didn’t want to get ahead of ourselves, this was music to our ears. On that same day Ellie had her first ever cuddles with her Mummy and Daddy!

However, just two days later, genetic results came back and confirmed that Ellie had two faulty genes, unrelated to Ichthyosis, meaning that she did not have a vital chemical needed to help her organs function.

Nothing could be done to help Ellie get better.

That was news no parents ever want to hear. Not only did this shock us, but the doctors and nurses too. Ellie’s was an extremely rare case, and one nobody expected.

From that day on, we never left Ellie’s side.

The neonatal intensive care unit did all they could to help us. They put beds up for us all to stay in the same room together and helped us to create precious memories that will last a lifetime.

The hospital let close family members come and visit Ellie so that they could make special memories too. Ellie had her first playtime in a bouncer, her first bath, the nurses took hand and footprints, we sang songs, played music, read bedtime stories, and cuddled for hours.

The hospital then arranged for us to stay at a local hospice so we could spend time as a family in a home setting. Ellie had her first ride in an ambulance with us, and our favourite nurse, Rhia, was by our sides the whole time.

Holding her, cuddling her, she was so cherished and loved. Our incredible little baby girl is now our bright star in the sky.

Ellie was the 19th person in the world known to have the disease. Her case has changed the genetic panels for her condition so that doctors can detect the disease sooner if examined.

We will forever be so grateful for the kindness, dedication and hard work put into Ellie’s care by the neonatal team in Southampton, and the incredible effort made to help us be together and spend quality time as a family.

The staff made the worst experience the best it could have been, which is why we chose to support the neonatal unit through Southampton Hospitals Charity.”