Players from Southampton Football Club made their annual visit to meet patients and staff at Southampton General Hospital on Wednesday (17 April).

Manager Ralph Hasenhüttl and his squad chatted to children and handed out an array of gifts including Saints toys, scarves and mugs, and signed player cards with personalised messages for the patients. 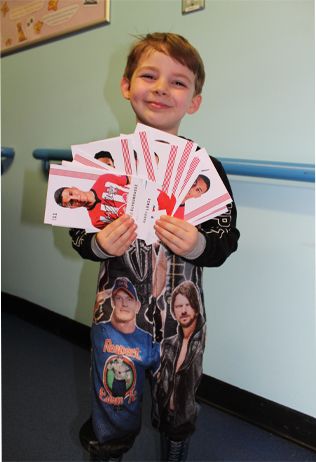 The team also spent time in the elderly care wards, putting smiles on faces and listening to lifelong supporters recall their favourite Saints memories from years gone by.

They signed autographs, handed out gifts and posed for photographs with patients and their families, members of staff and visitors.

During their visit, players also met with the healthcare play specialist team and a group of young patients for a training session to show off their football skills! Ryan Bertrand, Captain, commented:

We feel very privileged to have this opportunity to give back. It is very important for us to come to hospital and let the children know they aren’t alone, and that we support and fight with them.”

We also have a lot of respect and recognition for the staff here in hospital. It is very life affirming to see the care they give to their patients.”

We’d like to say a huge thanks to the players and staff from Southampton Football Club and our partners at the Saints Foundation for their ongoing support and for taking the time out of their busy schedules to spend time with our patients.
Seeing the faces of the patients and staff light up when the players made their surprise visits to the wards is always something special and they really made this a very memorable event for everyone.”

It was a particularly special day for nine-year-old Saints fanatic Leon Mooney, whose favourite player James Ward-Prowse stopped by to spend time at his bedside.
Young Leon was diagnosed with lymphoma last month and is currently undergoing chemotherapy, so he wrote a letter to Ward-Prowse in the hope the England international would pay him a visit.
Upon reading the letter, the Saints star decided to bring along a signed shirt and pair of boots to give to Leon, whose hospital ward is adorned with Saints memorabilia. Ward-Prowse explained:

The club is a family club that’s all about unity and togetherness and Leon is a big Saints fan, so I think he appreciated the time we spent to come and see him.
He’s going through a tough time and it’s not nice to see, but we can use the power of the club and the team to put a smile on his face. Hopefully we’ve allowed him to see more positively through his recovery now.”

Leon’s mum Sam summed up the value of the gesture:

He (Leon) has been in isolation the last few days, but he got told this morning he was out of isolation, so it’s just brought his spirits up.
It’s made a tough time much happier and I have a boy that has a massive smile, so I couldn’t ask for more.”

The Saints Foundation and Southampton Hospital Charity will be working together once again this year with their Southampton Golf Day. The event, to be held at Stoneham Golf Club on the 26th September, will see local companies and ex-Saints legends raise much needed funds for both organisations.
Last updated: 17/04/2019