When Declan woke from five days in an induced coma he had lost the ability to walk and had to be taught again. The former PE teacher was so weak he couldn’t even rip the lid off a pot of yoghurt.

To all the staff in the Intensive Care Unit, your commitment, your professionalism and caring is second to none. Every little thing that you are doing while you are at work is keeping us alive.”

Without a doubt, the Intensive Care Unit and everybody involved, you are the heroes of the country. I wouldn’t be here talking if it wasn’t for those people.”

In June 2018, Declan was rushed to hospital with sepsis and also diagnosed with pneumonia after collapsing at home.

He doesn’t have any memory of the five days leading up to that moment – his wife Christine does.

Declan had been laid up with a raging temperature which his GP had said was a virus. He couldn’t eat or drink. Five days on, his temperature subsided but his skin appeared mottled, his lips were turning blue and he gradually became delirious, which was the final straw for Christine who called 111 for help.

The paramedics were on their way when Declan tried to get out of bed and fell, hitting his head.

When they arrived, they took one look at him and told Christine he had sepsis.

“My blood ran cold,” said Christine as she followed the ambulance in her car to UHS.

When I arrived, they told me he also had pneumonia, it was serious, and they were taking him straight to Intensive Care.

Declan was on oxygen and still able to talk to Christine, but his situation got worse and doctors decided to ventilate him and place him in an induced coma.

When Christine returned the next day she found Declan “looking like a corpse, surrounded by so many tubes” and she was told the situation was critical and advised to bring their sons and Declan’s brother to the hospital in case he didn’t make it.

But he began to improve, and after five days Declan was able to be brought out of his coma. He remained intubated for around one week.

Declan said: “I can’t remember how I felt when I woke up. I knew the seriousness of the situation as I appreciated the surroundings and could tell I was in a bad way.

Everything was about me. It was me who was ill in hospital, it was me who had to be shown how to walk again, it was me who finally went home to recover. It was only when reading the diary that Christine had been keeping, which they had told her to do at the hospital, that the penny finally dropped and I realised just how much it had affected Christine and our sons too.”

Christine said, “When you have a loved one in Intensive Care you are very frightened. You get caught up in the recovery and then getting them home. It was great to have Declan back home again but my anxiety continued. For a long time if he fell asleep or I hadn’t heard him make a noise for a while, I would run to check that he was still breathing, still alive. And there is no back up when you get home, you still have all these questions and concerns and worries in your head.”

A year later, Declan and Christine were invited to join the EMPOWER pilot – a rehabilitation project funded by Southampton Hospitals Charity, that ran over eight weeks, for three hours each week. The course offers ‘patients’ an hour of physical recovery whilst their partners have time to talk, share and offload.

The group sessions are also hosted by specialists from different areas of the hospital linked to the patients’ experience – from pharmacists and physio to ICU doctors etc.

It helped Declan and Christine more than they could ever have imagined, “They understood a lot of things about what had happened and what caused Declan to have such vivid hallucinations/dreams,” said Christine.

Former PE teacher Declan: “Empower isn’t just important or something nice to have – it is essential in helping people to recover. All these emotions come out which you can’t explain. If you don’t deal with that huge vacuum, all those feelings will stay, and will become a problem.

“I now know why I could perhaps be short, snappy and get upset about things that wouldn’t bother me before. So much can be pre-empted and avoided.

“I seriously questioned whether I should be joining the group when I was invited. I was feeling fine, I had gained weight again and was up and running, starting to look like my old self again.

“I told them if it helped others then I was happy to help out.

“After just a couple of weeks the penny dropped. What we had learned, what we experienced and talked about was invaluable. If it hadn’t been for that group, everybody would have floundered in one way or another. It puts a lot of things in to place which you never quite understood.”

Christine said, “In some cases it is the first time that families have been able to share their own worries or fears. It gave me the chance to offload the emotional side of it all. It was a safe place to share and get rid of all the anger and upset I had been carrying. You get closure and clarity on things.

“To be able to tell your story, have someone else hear it who understood – it was like a therapy session but with people who knew exactly what you were going through. You understood for the first time about things and with an explanation it made sense and you could put it to bed and move on.

“Both of us initially felt we were one year on from it and we didn’t really need it. How wrong we were.

“You cannot possibly measure or quantify the benefits of the course. You literally have no idea, unless you’ve been through it yourself, of the awful effects or being in an induced coma or on a ventilator – or you have been the wife or husband or parent or child of someone who has.

“It is impossible to imagine people not having this available when it is such a critical part of getting your life back. We feel so privileged we have had this opportunity. 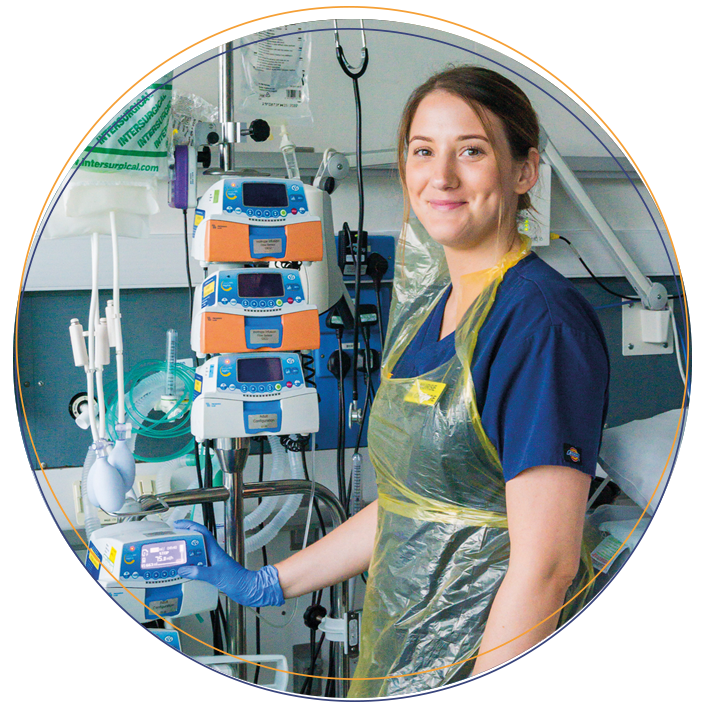